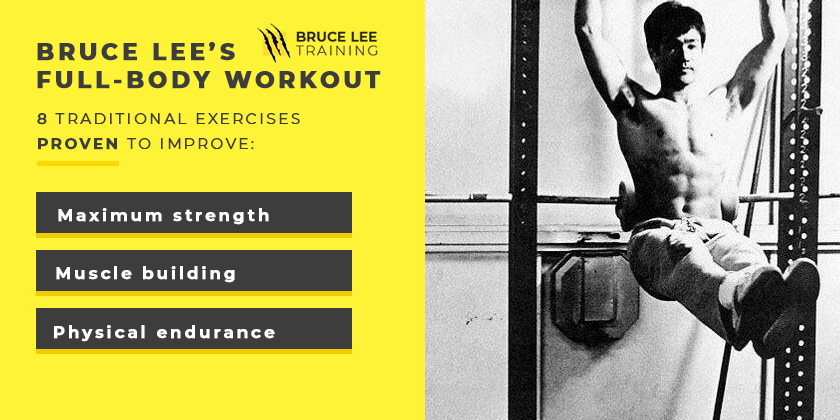 The Bruce Lee full-body training and strength routine was developed to increase his overall physical power and improve his overall muscular development.

Bruce Lee devised a full body, strength training routine when he decided that he should balance his muscular development and strength by targeting each muscle group of the body to progressive resistance training. 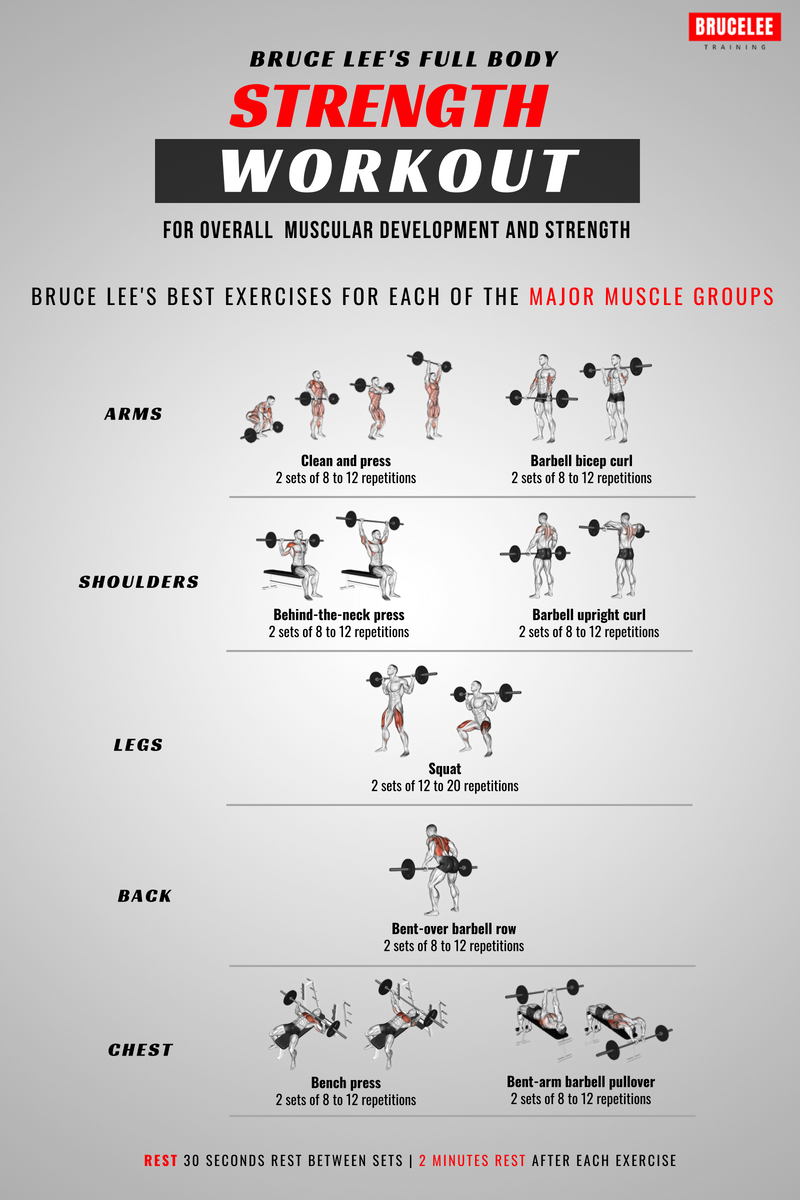 How to do the Bruce Lee Full Body Workout

The curl is the single most important exercise when it comes to building strong and muscular biceps. Bruce believed the correct way to execute the bicep curl is to grasp the bar at shoulder length and curl the bar up until the biceps are flex and hold that muscle flex for a couple seconds until you slowly lower the bar.

Behind-the-neck press: 2 sets of 8 to 12 repetitions

A shoulder workout that Bruce used to strengthen his deltoids and overall shoulder muscles. To perform, grab a barbell and firmly grasp the barbell with both hands at shoulder-width. Stand at a medium stance with and lift up a barbell to shoulder length, then elevate the bar upwards until your arms are fully extended. Lower the bar down to your trapezius muscles and hold for a contraction. Then elevate the bar again to start.

Upright Rowing: 2 sets of 8 to 12 repetitions

The upright row focuses on building the trapezius and anterior deltoid muscles. Grasp the bar at shoulder width and bring it up to your thighs. Keeping the bar close to your body, raise your elbows up from the side and bring the bar as close to your chin. Then lower the bar and start again.

To perform effectively, stand at a medium stance and with the bar firmly rested behind your neck, bend the knees until you reach a 90-degree angle. Explode the knees up and bring your body back to an upright position.

Take deep breaths during this exercise to increase performance. Inhale a deep breath before bending the knee and exhale after going upright again. Breathing is an important factor in increasing the effectiveness of the squat, according to Bruce Lee.

Bent-over rowing: 2 sets of 8 to 12 repetitions

The rowing exercise is regarded by Bruce as his favorite lat exercise and was crucial for building his incredible wing-like lat muscles. Rowing is also known as the bent over barbell row exercise. To perform, bend the knees slightly with your torso forward and bring the bar up to knees length. Keeping your head up and elbows tight, bring the bar back near your lower chest. Hold and squeeze the back muscle contraction for a moment and lower the bar back down to your knees.

The bench press is a fundamental exercise in any bodybuilding and weight training program to develop and strengthen chest. The bench press was a core exercise in Bruce Lee’s overall routine to develop the entire chest and triceps. To perform, lat flat on a bench and firmly grasp the bar at shoulder width and with the bar elevated above the chest and arms fully extended, lower the bar down to the chest area. Elevate the bar again to repeat.

Bruce Lee training his chest and lats frequently made this an effective exercise for building the chest and lat muscles. To perform, lie flat on a bench with a barbell at shoulder width and hold the bar above the chest while slightly bending the arms. Slowly lower the weight in an arc motion behind your head and bring it back to starting position.

Lee discovered early in his career that in order to push his boundaries and to improve his overall power in martial arts he had to introduce strength training, weightlifting, and bodybuilding to his training routine. He devised a full body workout that would maximize his potential in all his workouts.

Before he got serious about his training routine and nutrition, Bruce Lee’s height and weight was 5’7 (171 cm) and 141 lbs (64 kg), respectively. Within a short time frame, Lee would manage to increase his bodyweight to 165 lbs.

“Bruce took off his T-shirt, and I marveled again, as I always did every time I saw his physique; he had muscles on muscles.” – Chuck Norris, The Secret Power Within

This combination of developing his muscular physique while training his strength proved to be a powerful formula that later sculpted his impressive physique into what we know of today and which also allowed him to execute a combination of powerful punches and kicks that we see in his movies.

Bruce Lee’s ab workout was a prominent factor in building him a rock-like core to enable him to perform weight lifting exercises at a consistent level.

Having a strong core is strength training 101 when it comes to maximizing muscle growth by lifting consistently and with heavy weight.

The balance and development of speed, power, and stamina were key priorities in Bruce Lee’s training regimen.

On workout days, Bruce Lee invested nearly 4 hours in his home garage working out. He would tinker with different gym equipment and develop different weight training exercises that wouldn’t interfere with his efficiency and movement.

Bruce strived to develop muscular tissues that made him faster in combat and quicker on his feet. Although Bruce Lee frequently practiced bodybuilding concepts, he would apply his own philosophy to a specific workout because he didn’t want to have any limitations to the movement of his arms and legs.

“He is built flawlessly, not large. He has muscle mass in addition to muscular tissues, yet he moves with the skill of a ballet dancer.”

Bruce Lee’s full body workout program was developed behind Lee’s fitness philosophy of wanting to build a balance between all his muscle groups so that they can perform in unity when focusing on a specific objective such as delivering a dominating kick or being evasive in combat. Bruce theorized that a syndication that unified his all muscle groups to work together was his greatest objective to be able to perform at the highest level.

Lee formulated a full body workout routine that would give him a developed and defined muscular physique and a serious punching power for the big screen.

Lee’s weight would stay at a steady weight because of his balanced diet and exercise while his muscles began flourishing at an incredible rate.

Bruce Lee’s made remarkable muscle development at an incredible rate, his diet plan and exercise routines were strategically planned to give him the best results.

This gave Lee his well renowned vascular body and sculpted V-tapered physique. Bruce Lee’s body would be admirable by many and known for his developed lats and chest, defined shoulders, chiseled abs, and an astonishing small waistline.

Bruce Lee frequently trained with standard gym equipment such as the flat bench, barbell, squat rack, and dumbbells. Many of which can be used as home gym equipment and used for home workouts.

On days where he isn’t weight training and building his muscles, Bruce Lee would supplement his fitness regimen with additional training activities that consist of running or jogging, speed training, abs workout, circuit training, or martial arts training.

Bruce Lee training his abdominal muscles frequently was regarded as an important element in helping him perform all his compound exercises.

Weightlifting alone wasn’t enough to give Lee the body he had, it was a combination of Bruce Lee’s workout and diet that gave him the phenomenal body he had.

Through a series of theorizing, orchestrating, and formulating ideas on various exercises and routines that work best for him, Bruce Lee wrote his own workout program that would supplement his combat and martial arts training,  The training routine cultivates bodybuilding fundamentals and strength training principles that are essential to beginner and advanced athletes.

The Bruce Lee training manual was written almost 50 years ago but the techniques and concepts are widely seen today even in modern workout programs. The manual was written in a time where bodybuilding and weight training hadn’t really fully reached the mass and ideas on what exercises to perform to hit certain muscle groups was still a little hazy.

Bruce Lee trained with his own philosophy and paved a path for martial artists to introduce weightlifting and strength training concepts into their practice to perform at a higher level.

Scroll back to top